Although the major reason for the employment of hydrofoils is to lift the hull out of the water to reduce the effect of waves and to reduce the drag at high speed, a naval hydrofoil ship spends a considerable portion of its life hullborne and must have an efficient hull form to keep the drag low at low speed and through takeoff. Total drag just prior to takeoff is a significant factor in establishing the power requirement. Careful attention must be paid to the hull design to minimize this effect. Figure 3 shows a generalized smooth water drag curve for a hydrofoil craft with its significant “hump” prior to takeoff. Comparison is also made with a typical planing craft to illustrate the high-speed advantage of the hydrofoil even in smooth water. To overcome additional takeoff drag which results from rough water, a power margin over the smooth-water takeoff drag is required. Since the magnitude of this margin is a prime factor in the sizing of the propulsion system, it is essential that it not be arbitrarily overspecified. Tests in design sea states on well-instrumented U.S. Navy hydrofoils show that 20 to 25 percent margin is ample to permit takeoff in rough water in any direction.

Some of the principle advantages of hydrofoil ships, over all other monohull or alternative ship types are: (1) the ability of a ship, which is small by conventional ship standards, to operate effectively in nearly all sea environments, and (2) an improved ratio of power to displacement in the 30 to 50 knot speed range permitting economical operation at these higher speeds. The submerged-foil ship can maintain its speed and maneuverability in heavy seas while simultaneously providing a comfortable working environment for the crew. The ship’s automatic control system (ACS) provides continuous dynamic control of the ship during takeoff, landing, and all foilborne operation. In addition to providing ship roll and pitch stability, the ACS controls the hull height above the water surface, provides the proper amount of banking in turns and all but eliminates ship motions caused by the orbital particle motion of waves. Foilborne operations only become limited as wave height exceeds the hydrofoil’s strut length. Figure 4 shows operating data points for three submerged-foil hydrofoil ships in actual sea conditions. The data clearly show only a modest reduction in speed as wave heights increase. A hypothetical operating envelope is drawn to represent hydrofoils designed to have a 50-knot speed capability in calm water. 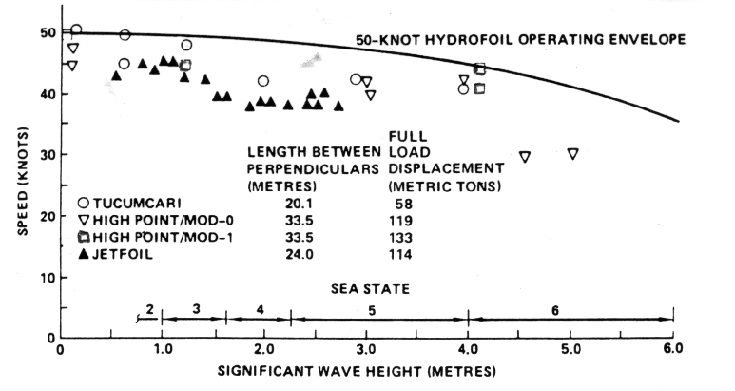 Besides a significant speed advantage, hydrofoils are more maneuverable and provide a more stable platform than conventional ships. Foilborne turns are accomplished in a banked (coordinated) fashion. This causes the centrifugal force required in turns to be provided predominantly by the reliable lift capability of the submerged foils rather than by the unpredictable side forces from the struts. Turn coordination enhances crew comfort during high-rate turns because the accelerations due to turning are felt primarily as slightly greater vertical forces rather than lateral forces. For example, a 0.4g turn is felt as only 0.08g vertical acceleration increase while the lateral acceleration is zero. Therefore, hydrofoil ships have design turn rates of 6 to 12 degrees per second, two to four times those of conventional ships, and they can maintain these rates in both calm and rough seas. This makes the hydrofoil ship a more difficult target for enemy missiles, guns, or torpedoes. The exceptional stability of the hydrofoil ship makes it a superior platform in which to mount surveillance equipment and weapons while maintaining crew comfort and proficiency.

Return To Previous Page (Configurations)Go To Next Page (Features)

Disclaimer: IHS does not endorse or recommend specific products or services, nor does IHS accept paid advertising. However, the Links Out and BBS pages features sellers of many hydrofoils and related products as a service to the hydrofoil community.

Please report any technical problems with this website by email to: webmaster@foils.org